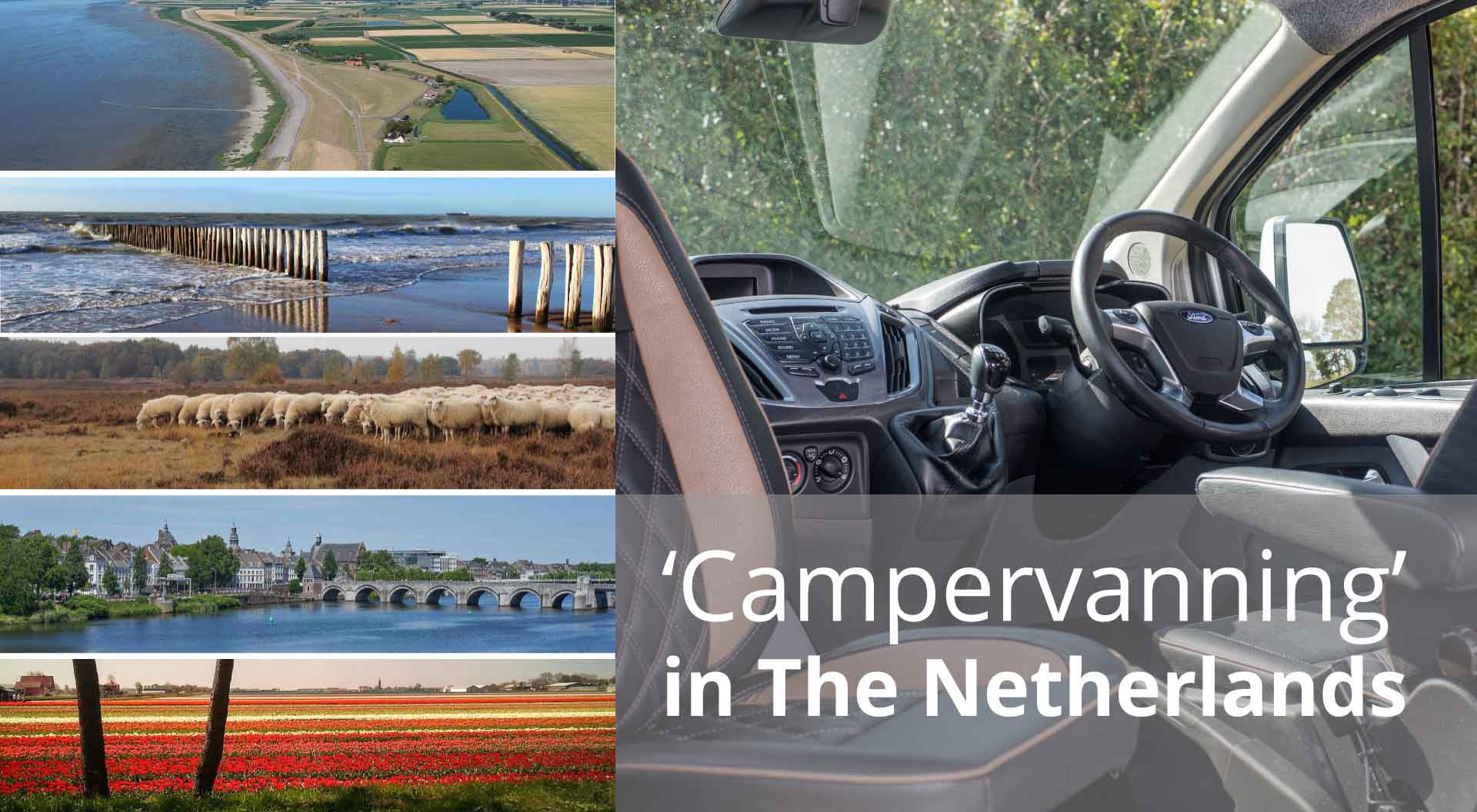 From swirling windmills and bobbing flowers to cycling the countryside and crossing beautiful canals, The Netherlands proves that great things come in small packages.

Exploring The Netherlands is like diving head-first into a Vermeer painting––except it has only gotten better over the centuries. Not only is the country every bit as attractive as the Dutch Masters made it look on canvas, but it’s also filled with daring design and uninhibited fun. Top that off with a blooming countryside, serene stretches of coastline, Dutch ‘gezelligheid’, and easy access from the UK, and you’ve got a road trip with endless horizons. So jump in your Campervan, sail or train tunnel to the continent and drive North. It’s so close!

Mid-March to mid-May is the best time to view the bulb fields filled with colour. If you Visit to the coastal strip of North and South Holland between Leiden and Haarlem, you will no-doubt see these colourful scenes.

The Dutch cycle en masse. From primary school, through a first date, to the office, the bicycle is their trusty steed in times of need. So, bring your bicycle and go on a bike ride to enjoy the windmills, flowers, and the stunning scenery. Cycling is safe, there are dedicated cycle paths everywhere From bustling city centres to scenic country sides, and you’ll just fit in like a local; plus, there are no hills! Holland is best explored on a two-wheeler.

The province of North Holland is located in the north western part of the country. Home to the capital, Amsterdam, Noord-Holland is what you’d expect the Netherlands to be: a flat countryside on which cows graze and flowers bloom, dotted with traditional villages and windmills, and surrounded by water. To make the province even more Dutch, over half of the province is reclaimed polder land. Like Haarlemmermeer (Haarlem Lake), which was drained and turned into land.

Visiting Amsterdam is of course a ‘must’. With coffeeshops where people don’t come for the caffeine, and a legalized Red Light District, the Dutch capital is famously liberal. But the city is not just a place of decadence; in fact, Amsterdam attracts millions for its museums, cultural heritage and open outlook.

At half an hour from the country’s capital is the province’s capital, Haarlem. With ancient architecture, cobblestone streets, and broad canals, this city is as pretty as Amsterdam––but doesn’t get nearly as many visitors. Moving to the countryside, places like de Zaanse Schans in Zaandam show a picture-perfect Dutch scene, one of windmills and tulips in bloom. Traditional towns like Volendam, Edam, Marken, and Enkhuizen show Holland at its best, too. Finally, visit the island of Texel for road trip relaxation amidst the dunes.

The central-eastern province of Gelderland is the largest region of the Netherlands and borders Germany. The province includes some of the best Dutch patches of nature, like the Veluwe and Betuwe.

An extended Holland road trip should include Gelderland. Visit the Hoge Veluwe National Park. Its sand dunes, heathlands, and woodlands are home to deer, boar, and mouflon. While you’re there, have dinner at the impressive St. Hubertus Hunting Lodge, and visit the Kröller-Müller Museum! De Betuwe is a bouquet of fruit orchards, cherry blossoms, traditional farmlands, and picturesque towns. The best way to explore Gelderland is by bicycle (of course!).

In the northern part of the Netherlands, Friesland is a proud province with its own history. It even has its own language, Frisian! Conquerors of the sea, the Friesians reclaimed much of their land from the water––clearly showing in the Waddenzee, an intertidal zone where the transition between land and sea is as subtle as you’ll ever see.

Visit Friesland for the Waddenzee. In an everlasting play between the sand and the sea, the Wadden Sea consists of shifting sandbanks, mudflats, and wetlands, anticipated by great stretches of pristine dunes. The area makes for the Netherlands’ favourite summer getaway. The Frisian Islands, or Wadden Islands, are a beachgoer’s delight! Inland Friesland is marked by cute towns and welcoming locals. Visit Sneek, Stavoren, and Hindeloopen, towns steeped in traditions and Frisian history.

The southernmost province of The Netherlands, Limburg, feels and looks different from the rest of the country. For starters, the rolling landscape looks nothing like the Dutch flatlands. Green hills and rustic towns, timber townhouses and medieval mansions add a rustic charm to a province that blends The Netherlands with elements of Germany and Belgium. After all, Limburg is where the three countries meet!

Drive your campervan through the province as you make a road trip across three countries. Stop by in Maastricht, which town hall, basilica, the Helpoort (Hell’s Gate) are must-sees! And if you’re a bookworm, find a fun read for during your road trip in the Dominicanen Bookstore, located in an ancient church! Next, visit the tiny town of Arcen. Set between the Maas River and the German border, Arcen is a local favourite for scenic walks and thermal baths.

Zeeland has an intimate relationship with the ocean. Surrounded by water and mostly below sea level, the southwestern province of Zeeland gets its name from the sea. The province is a large river delta consisting of islands, peninsulas, and a strip of land bordering Belgium––all connected by an impressive set of flood barriers that protect the province and the Netherlands from flooding like it did in 1953.

Due to its geography, large parts of Zeeland have long been isolated, preserving local culture, dialects, and ways of life. The province is full of quaint towns, long stretches of dunes and beaches, and dreamy waterways. Zeeland’s delicate balance between water and land make it a popular destination for locals and those in the know.

On your way back home, roam Zeeland’s islands, exploring old towns and the many beaches around. In fact, there’s always a beach around in the province of water! It’s why water sports fanatics love Zeeland, especially kite and windsurfers. Fed by the sea with delicious mussels, oysters, and lobsters, foodies will feel right at home in the province of water, too.

Visit mighty Middelburg, the capital, and see how the Zeelanders have conquered the sea with bricks and bridges. Unwind on Zeeland’s best beaches, like Cadzand amidst the marshes, or de Hoge Hilt, a favourite for water sports and part of the beautiful stretch of coastline known as Zoutelande.

You can find out more about which cookies we are using or switch them off in settings.

This website uses cookies so that we can provide you with the best user experience possible. Cookie information is stored in your browser and performs functions such as recognising you when you return to our website and helping our team to understand which sections of the website you find most interesting and useful.

Strictly Necessary Cookie should be enabled at all times so that we can save your preferences for cookie settings.

If you disable this cookie, we will not be able to save your preferences. This means that every time you visit this website you will need to enable or disable cookies again.